Number of hairs named since 2010: ongoing 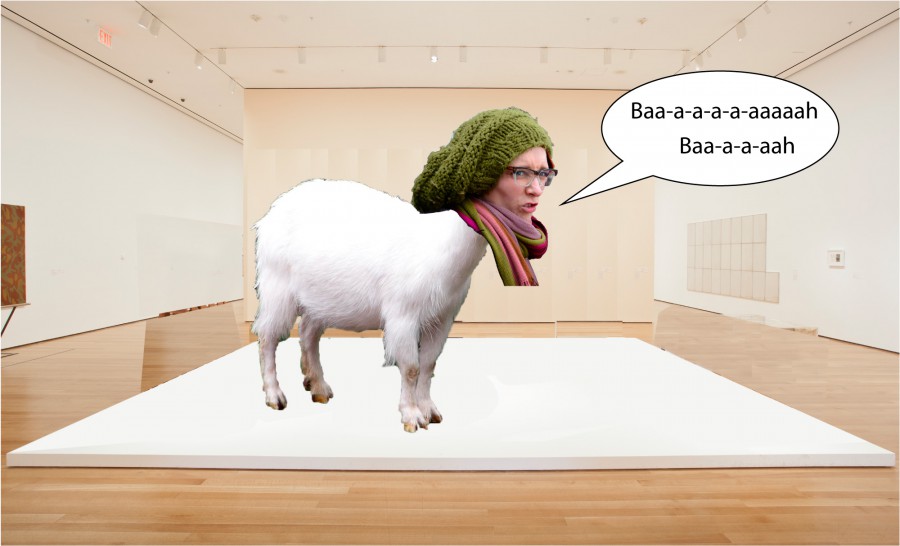 Helen Skhoney is a goat.  She was made by Patti Smith in 1959 in order to trim the grass around Patti’s new climbing frame.  However, she was universally regarded as so incredibly witty, funny and beautiful that she was quickly put on display at the MOMA.  Spending long periods on a pedestal, bleating softly and looking at the pieces around her, Helen quickly learned how to be a phenomenal contemporary artist.

Her work deals with hair, other hairs and sometimes hair, trout pears and the essence of cat.  Negotiating between the worlds of human and lemur, she seeks to explore the impossibility of potato.

She lives and works between her ears.  She is temporarily disguised as a human.

Bits of text and quotes… :

“When Helen Schoene was a dancer, she used to repeat herself all the time.”   Matthew Webber

”A set of questions and half answers, of beginnings and appendices, of purposefully unmade decisions and open ends examine an unsteady love affair with dance as an art form. The audience is called to exercise their agility in recognising possible ways of reading the overlay of writing, voice and movement. Hereby the structure of a book forms a means of orientation and binds the overflowing material. A queston arises at the end: Is Helen Schoene object or protagonist of the plot?”   text teaser: When Helen Schoene was a dancer she used to repeat herself all the time, Tanz*Hotel, Vienna 2014; HS

“Helen Schoene’s frustration comes with separation from her mother tongue. Her diligent reading calls for ever-increasing scrutiny as she grasps for meaning, trying to unpick each word. At her wit’s end, she turns back on herself, clutching at straws, searching through split ends.”                         Katharine Fry

“Helen Schoene examines images and claims that duplication, multiplication, variation, reproduction and finally repetition do not dilute, but rather distill the meaning of these images. Through their multiplication, sequences emerge that transform these static images into performative acts.  Experience becomes alien and reality a myth.”       HS

“Conversly, hair is unique.  It is personal, and is the unity of creation – from the many, one.  It’s halonic mass is such that Medusa’s hair, unlike her hairs, is an object of reverence.  Yet, it is also a warning of the danger of proximity, the futility inherent in analysis.  It is this that makes it so disturbing, for it stands as a lonely cenotaph to the failure of logic.”

“Presumably, there was once a reality.  It was full of red vans and potatoes, sun and red hair.”    Matthew Webber